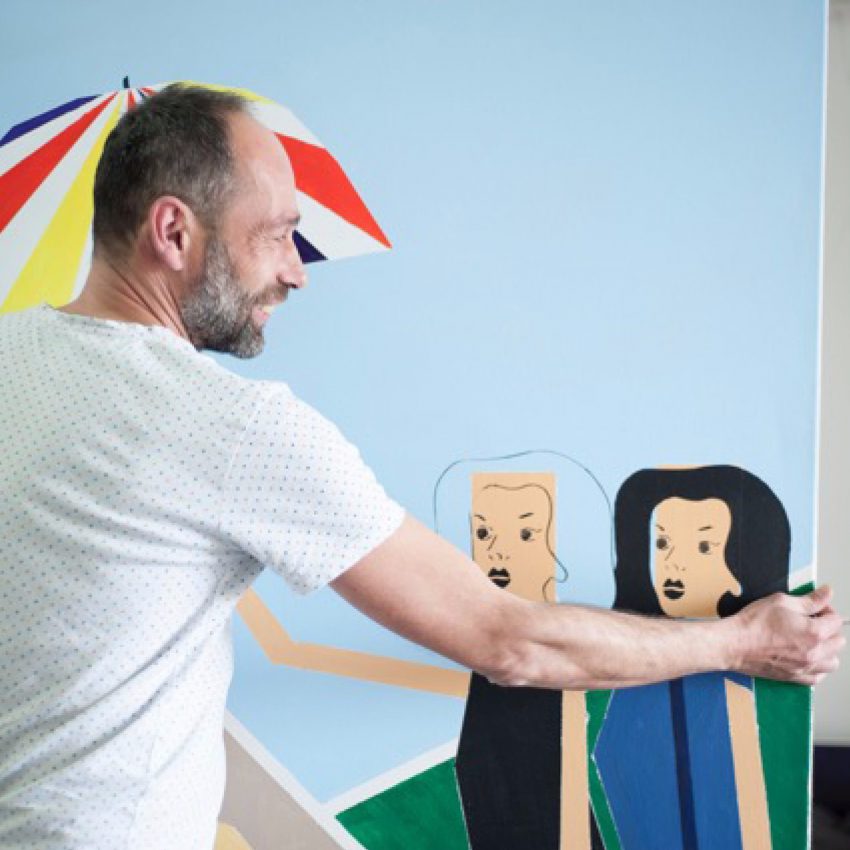 May 29, 2019
text by Ringaile Papartyte
cover photo by ANJA TESKE
50% culture
popcorn 50%
Say hello to our new feature - voting poll. We invite you to express your opinion on this piece and let's see if you'll match with the other readers. Slide me! Slide me gooood!
Thanks for the vote! Merci!

If you’ve ever been wondering how to combine your super busy schedule with short weekend trips and two-times-a year-holidays somewhere South, look at Michel Castaignet. This French painter can hardly imagine living in one place – eats breakfast in Berlin and his next dinner in Sicily. No business class flights, just many hours on the road with his cats. And quite a bucket of stories he collects living this nomadic routine—actually, three routines. And in between these, Michel also visits Art Fair Art Vilnius almost annually. This year will be no exception for him.

You call yourself a nomadic artist. Escaping the usual routine always seemed like a romantic choice only an artist, a free-spirited creator, can make. Is it still a privilege of an artist, or maybe the ability to mix and match travels, work, and your whole life became a habit of 21 century? Is there any romance in nomadic living left these days?

I’m a nomad, and that is different from someone who travels a lot. Most artists travel all year round to visit arts events. Throughout history, art has always been international, and artists were active in several countries. Everybody travels a lot in the art world, so yes, it’s kind of romantic or glamorous to fly from champagne glass to champagne glass. I do that kind of traveling, but I consider myself a nomad more because I live in three different locations, France, Germany, and Sicily. So, I see myself as going from place to place rather than traveling. I’m like a migrating bird. When Berlin gets cold, I go to work in Siracusa. When the tourists arrive there, I’m off to France.

It sounds super romantic. But it involves many days of driving my car, full of the art material and also my screaming cats in the back, sleeping on motorways, eating junk food in petrol stations and always arriving at a place which is super dirty because I haven’t been there for months. Plus, I have to deal with paperwork in each country, so I’m not exactly escaping the usual routine. It’s more like three routines than no routine.

In Berlin, I start my day of work with a 30 min bike ride. In Champagne with a coffee at my neighbors with a view of the countryside. In Sicily – with a coffee in a bar full of loud workers and plenty of sunshine. So, in a way I can live several lives simultaneously, I’m not exactly the same person everywhere, and maybe that is super romantic.

Another reason I call myself a nomadic artist is that I’m totally European, so it pisses me off to have to say I’m a French artist educated in England and living between Germany and Italy, that’s far too many words to just say I’m here.

After all of these travels-non-travels, if you could choose only one nomadic destination soon, what would it be?

It has to be two destinations, otherwise, you’re not nomadic, you’re just somewhere. The first would be a capital city with culture, and the second one – a remote place, a counterpoint that is totally different. Berlin is good for now, but it attracts so many people. I’m afraid it will become overcrowded like London and Paris. So maybe for the future, I would choose Madrid, which is super attractive but not too crowded. And a counterpoint could maybe be a little picturesque city like Kuldiga. That would be cool to commute between those two places.

Yes, traveling has become tricky. Hundred years ago, only artists, merchants, and scientists traveled, and that was good, these professions need cultural exchanges. I belong to this tradition, but with global warming, it’s difficult to sustain. I’m a real pessimist in terms of ecology. I’m now planting a forest around my atelier in Sicily. Maybe not enough to balance my consumption of petrol, but at least it will provide me with a bit of oxygen in my old age.

Even if we find a source of green energy quickly, I think we’re doomed anyway, because mass tourism is destroying everything. How can we prevent people from traveling? Everybody wants to visit Paris at least once in their lifetime, who are we to tell them they shouldn’t? Maybe virtual reality will replace tourism one day, but I’m afraid it will come too late. All the ecological problems should have been addressed thirty years ago; it’s kind of too late now, we’re surfing on the downfall.

On the one hand, you have more and more people who adopt a responsible attitude towards consumption and ecology. On the other hand, we’re building bigger ships to transport more tourists, and we aggressively promote having children who themselves will want to travel. The future is made of masses of people moving all over the world made of tarmac, shopping malls, and hotels with a view. Lovely. Ironically, this grim situation is also an incentive for the lover of nature to travel now before it’s too late. You can still find yourself a spot somewhere where you can feel good and live many different experiences, so you should go and get it now before it disappears.

Because nothing replaces traveling in terms of experience and knowledge of oneself, you can watch a movie, that’s one hour, read a book, that’s four hours, drop an acid, that’s twelve hours. But if you travel, you put yourself in a situation where everything is new for days or weeks, and that changes you deeply.

Ok, let’s get on a trip through your art now. Abstract landscapes of yours look pretty detached from any context, differently from other paintings in which one can almost hear people chatting – these situations seem pretty real. How important are the exact stories behind your works? Do you want to tell some, or the interpretation of the viewer is more important to you?

My landscapes look indeed pretty detached from reality, but that’s because they come from many sketches I do overtime. I sketch a scene, then over the months I think about it, I sketch a few lines I remember from the original drawing, I set it aside and work on other stuff then some lines or shapes hunt me, so I draw them again, etc. So, when I decide I will finally paint the landscape, the resemblance with the original scenery is minimal.

I also do genre painting, which is a landscape with figures. Here the landscape is a bit less matured because it’s not the main subject, so it’s easier to understand it for the viewer. The figures, I have a lot of fun painting them, and that’s why the result is often joyful – they are only in awkward shapes, and yet they are immediately recognizable as figures. For years, I have collected family photos I found in various flea markets, I have used them as some kind of documentation a lot. I like their muteness, very often, we can only guess why those people are in the photo, so it’s up to the viewer to make up the story behind the scene.

Nowadays, I don’t rely on photos for my paintings anymore, but I have all these images in mind, so I can reconstruct endless compositions that speak to the viewer. In a way, the story behind the scene is not super important. I have a little narrative in mind that helps me to find a title, but sometimes I forget where the title comes from. The story is not important because my work is more about the balance of shapes and colors, rather than about the narrative that could explain the depicted scene.

Could we try an experiment and create a little dialogue to one painting of your choice: what could these ladies be talking about here?

This one, I called it Backstage, most probably because I painted a guitar. If I would have painted a plant, instead it would have been called Lazy Sunday or something like that. But Backstage it is, so we have to imagine that it’s a band relaxing before or after a concert or two friends joining a singer backstage. I prefer to think it’s a band. It’s obviously in the countryside. The group comes from Berlin, they played in a small village in a barn in front of a scattered crowd, enveloped by the smoke of grilled sausages. I let you now imagine the conversation: – Prosit, girls!

Our monthly topic is Romance, so could we continue with the little dialogues: what was the most romantic chat that never happened to you, although you had it all planned in your head?

Well, I’ve been married for 15 years, so I forgot what romance is 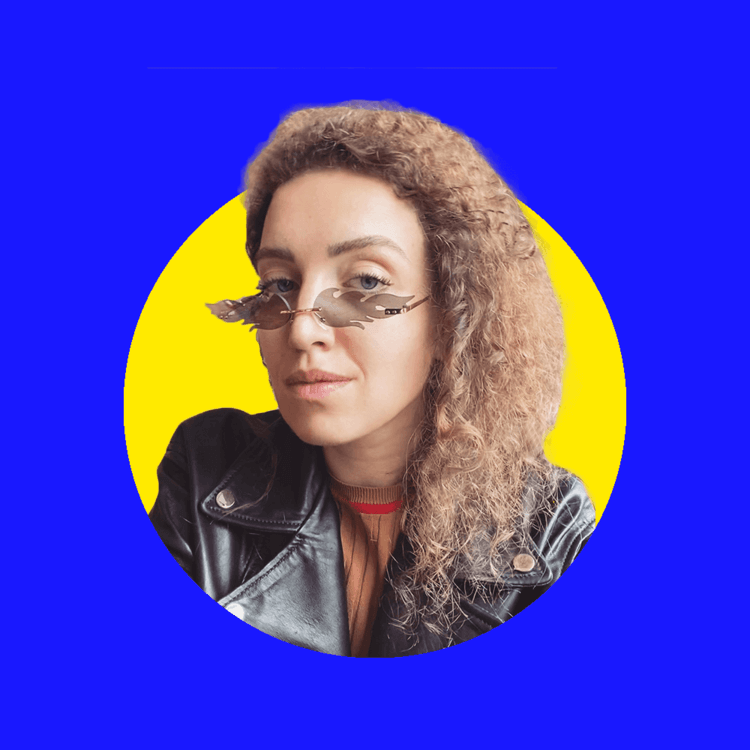 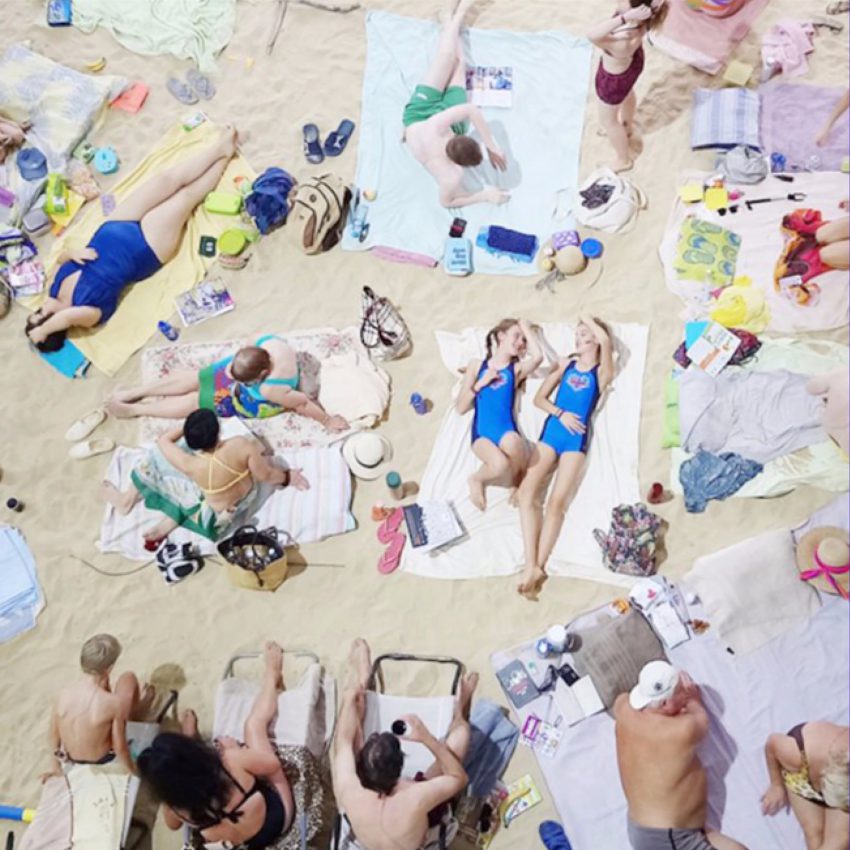 Venice Biennale: May You Celebrate Interesting Times And Stay Sane

Venice Biennale: May You Celebrate Interesting Times And Stay Sane 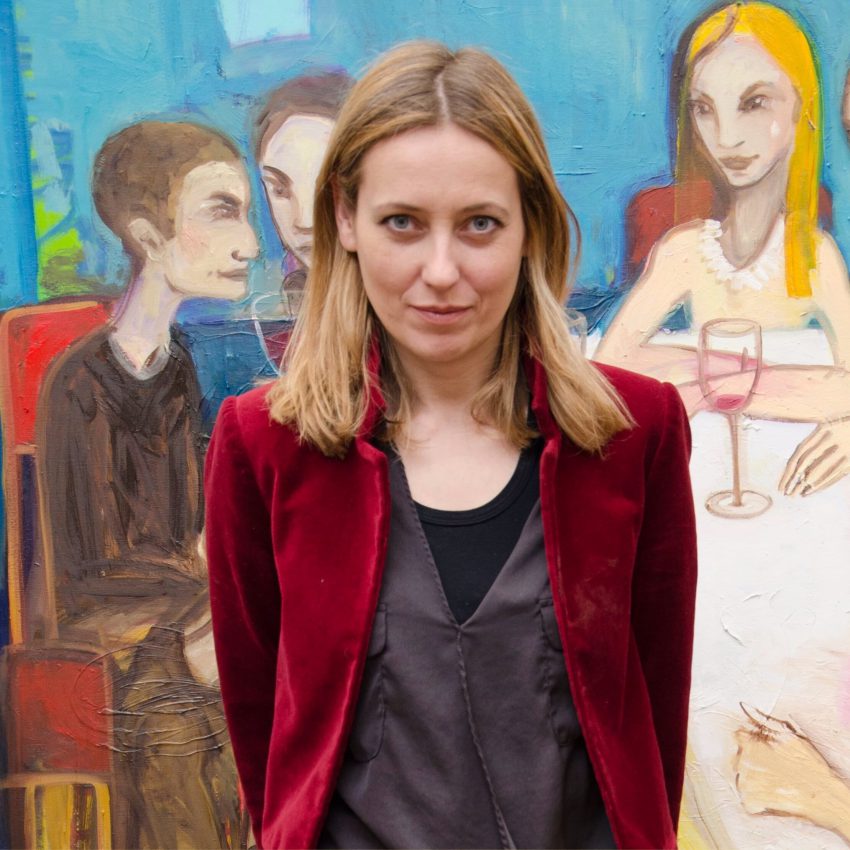 Ruta Jusionyte: We Want a Multiple Woman, Who Doesn‘t Exist

Ruta Jusionyte: We Want a Multiple Woman, Who Doesn‘t Exist 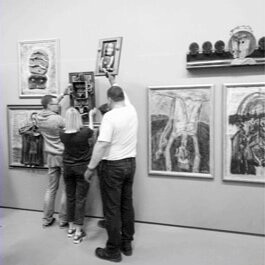 Art Collecting is Something Like Refrigerator Magnet Collecting, but Better

Art Collecting is Something Like Refrigerator Magnet Collecting, but Better