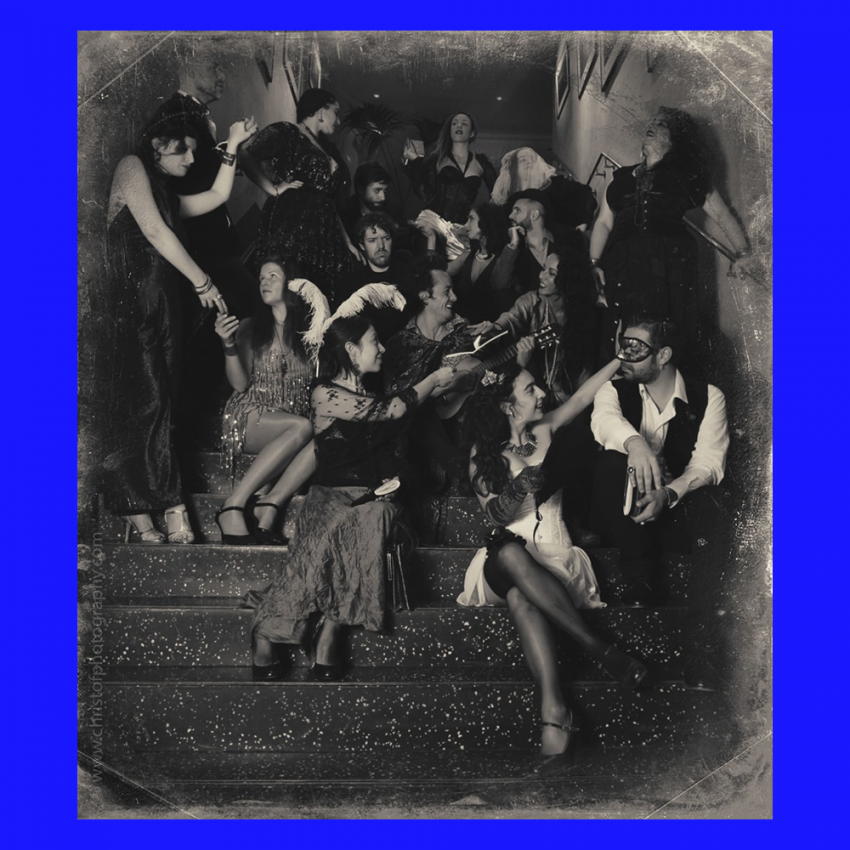 September 7, 2020
text by Ausra Juozapaityte
36% fashion
kitsch 64%
Say hello to our new feature - voting poll. We invite you to express your opinion on this piece and let's see if you'll match with the other readers. Slide me! Slide me gooood!
Thanks for the vote! Merci!

Once upon a time in Paris… I was hanging out with my two dear Mademoiselles. Embracing Paris has always been quite an affair, but we had a truly special one back then. Guided by a few glasses of some Vignes Francaises, we ended up (of course, around midnight while in Paris…) in a very spectacular place called the Poetry Brothel – intimate poetry reading tailored exclusively for your senses and imagination, and held in a cabaret-atmosphere-inspired house. And now, I am delighted to talk to Tony Alberto Rigettini – aka poetry pimp who brought the Poetry Brothel to life in Paris.

For starters: I don’t think we will be able to escape this general question – what does the Poetry Brothel stand for?

Well, think that something created by poets; it’s necessarily a metaphor. A maison close to a place where poets replace the prostitutes. And what they sell is an original live molecular poetry. In a way, they also sell themselves, their bare creativity, their voice, their soul, and their secret words in a room lit with candles. You can go and choose from a variety of poetry whores, you can have a look at the selection for the night on the menus, they can hook you at the bar, or you can talk to the pimp, he knows your poetic desires, and he can help you to find exactly what you are looking for.

Tell us a bit about your story about how you got involved in the Poetry Brothel?

The Poetry Brothel was founded in January 2008 in New York by Stephanie Berger and Nick Adamski. I was in Paris hosting two poetry events – a weekly open-mic called Spoken Word Paris, and a Fight Club, called Writers get Violent, where writers would vent their spleen punching each other on a ring. In this case, not a metaphor at all, real punches, real ring, real three rounds, and real illegal betting included. I don’t know if this gave me a sort of reputation, but I received a call from New York. Nick and Stephanie wanted to open a branch of the Poetry Brothel in Paris, and somebody told them I could be their… poetry pimp. I had to find the right poets and the right venue. On November 14th, 2014, in Pigalle’s red-light district, Le Bordel the La Poesie was born.

How far is it from a normal poetry reading, and how close it is to a contemporary cabaret?

If you ask me, it is a poetry reading. The main difference is that other poetry readings are public readings. The Poetry Brothel it’s the only place where you can have a poet reading just for you. It’s very intimate. I don’t know where else you can have such an intimate, emotional experience. Of course, it might happen to you to be in a relationship with a poet, and you might enjoy this rare moment every night, in your bed, and for free. But if you are not that lucky, well, you just need to visit us. It resembles a cabaret by the way the poets and, often the clients, are dressed up and by the atmosphere you are surrounded by as soon as you step in. Also, while waiting or deciding to go to the private rooms that are normally hidden. In the public space, many things are going on: all sorts of impromptu performances, live music, dance, stand up comedy, burlesque, tarot reading, portraits, body panting, a-vanguard acts, and an explosion of sudden loud poetry.

Describe a little bit the brothel’s main ‘characters’; are the most of people are professional poets/ writers?

Well, the main thing is the variety of selection. That’s something I aimed for, especially in the beginning, when I was the recruiter. I started it, but my role is now more representative. Rim Battal and Zoé Besmond de Senneville are now are running it for real. Rim is a known and published poet. She has three interesting books out, but I think the Bordel de La Poesie adds a new dimension that perfectly suits her. There are lines of clients waiting for her. Zoé, who goes with the Brothel name of Colette Gabrielle, is a real belle époque character, so 19th century that she’s also a nude model and actress in everyday life. We have a regular Madame, who has changed several times during the years. Now is Margot Galatée Ferrera. She’s young, but she has the physique du rôle to master the house. She is also an mc in other poetry scenes. Mademoiselle Palmer has been the madame for a long time. Having a theatre background, she conducted it with strong leadership, even a little bit strict with the rules, but she gave everybody confidence and discipline and brought a solid structure to the art of poetry whoring. Bitchy Witchy is one of those characters you imagine is a poetry brothel character, a rowdy voice a la “Edith Piaf de noartri”, straight in your face, provocative, verace e caliente, not only when reading, in any single moment, you can hear her screaming. She’s a known performer from the poetry slam scene. Even Fil de l’air and Dareka come from the slam scene, I mean performative live poetry, normally very loud and recited from a stage.

I think they’ve been great, adapting themselves into something very different, aka intimate poetry. Then you have Ferdinand, who’s kind of the opposite, a dark, decadent, byronian poet, he doesn’t look for his clients, and the clients look for him. Like Stained Grace (Lithuanian heritage) with her discreet (stained) grace makes the clients think they are choosing or they are approaching her, but it’s rather the opposite, so many are falling in her net of plumes. I shouldn’t reveal this, though. Paradis, it’s unpredictable. I like to call him to solve intricate situations with difficult clients, even when we have children as clients. Soraya, poet and masseuse, she receives clients in a special room, and you’ll have a massage with a poem whispered in your ears. Satori Sting. She’s a French Professor at the University during the day and works for us by night, a thing her students cannot even imagine. She teaches English Poetry and writes and reads in both languages. When I proposed this gig, she went away outraged by my indecent proposal. One year later, she came back and said I’m ready. For somebody, it’s just once, or a period in life, we had great international poets whoring just of one of few nights like Malik, Megan Fernandes, Jason Stoneking. But they are so many I don’t want to forget anyone. Doctor Callosum, Miss Peacock, Littie Leto, Azur. You are putting me in a difficult position cause I don’t want to forget anyone and, surely, I mentioned only the most recent ones and not even all the other performers that are part of the family. They are all different, for style, background, origin, age, inspiration; we can really fulfill all your fantasies. But concerning the core of your question, they have a life. During the day, or the week they can be very different persons. Also, it’s very difficult to even call somebody a professional poet (if you can live out only from your poems, I think you are a wealthy aristocrat). But let’s say that some of them are true artists, and some are established poets.

How do you find or create lush interiors of a bordello? What other aspects are important in creating this cabaret environment?

We had an interior designer, Helen Cusack O’Keefe, better known as Mademoiselle PomPom de La Tour Awful, who was creating a decor full of amazing details, sometimes calling every room according to a concept. Now we are more self-designed. Choosing the right place is already quite an important task. We have organized the Poetry Brothel in many different places, theaters, bars, clubs, hotels, and private houses. I think we can do it anywhere. It’s just a matter of creating a specific space that feels comfortable for both clients and poets. Sometimes people who read about the Poetry Brothel are afraid or think that they risk finding themselves in an uncomfortable situation. But when they arrive at our events, they realize that it’s rather the opposite. It’s a very comfortable and friendly place where you feel cozy and free.

I am also very curious to hear about your ‘whore’ looks and outfits! I guess quite a lot of attention is being paid to that…

Lots of attention indeed. We had a lingerie designer, Rosario Puñales, who marvelously dresses the Postribulo Poetico in Barcelona, but changing so often, the cast became complicated to coordinate, and we are now on our own. We all try to be on the same line while preserving everybody’s freedom and choice. But we do ban phones, pads, and contemporary hi-tech sorcery! Not in my Brothel! We prefer notebooks, paper, candles, jewels, eyes, and skin. I think the preparation is a show in itself, it’s a pity the audience misses it cause you will see a dozen acrobats trying to dress up and fixing makeup, crammed in front of a single mirror. For every episode, we use a theme that influences the details, nuances in the costumes, inspirations in the poems. I think the outfit should say something about your personality, not cover it (what is, I guess, a topical issue in fashion, in general…).

Could you share with us THE … a memory from one of these immersive poetry events?

I can tell you about the terrorists’ attack in Paris on a Friday night…We were in a night club not far away from Le Bataclan, and, suddenly, we were locked in, and we started receiving news of the shootings in the whole area surrounding us. The bartenders decided to give us drinks for free. Some of us stayed the whole night, and we slept there. Actually, the owner even forgot about us and left. We had to walk in total darkness to reach the surface, and that morning seemed unreal. The sky was blue and sunny. We reached the first café to better understand what happened, and only at that point, we realized its gravity. Of course, there are many unbelievable or spicy, or funny, or dramatic, or embarrassing moments I could tell you about, but I have a rule: what happens in the Poetry Brothel stays there.

Lastly, I am sure that you have now triggered our readers’ interest in visiting the Poetry Brothel! Where and when could they do so?

Of course, during the COVID-19 times, whispering into strangers’ ears is probably one of the most forbidden things. But out of these emergency times, we have regular events, almost once a month. You can also visit different Poetry Brothels worldwide and go to the major cities in the US, South America, and in Europe, use our tokens in Barcelona, Madrid, Paris, Amsterdam, London, Dublin, Berlin, and Reykjavik. Also, if you want to start thinking about it, I suggest we open one in Vilnius. It seems to be the perfect place. What do you think? 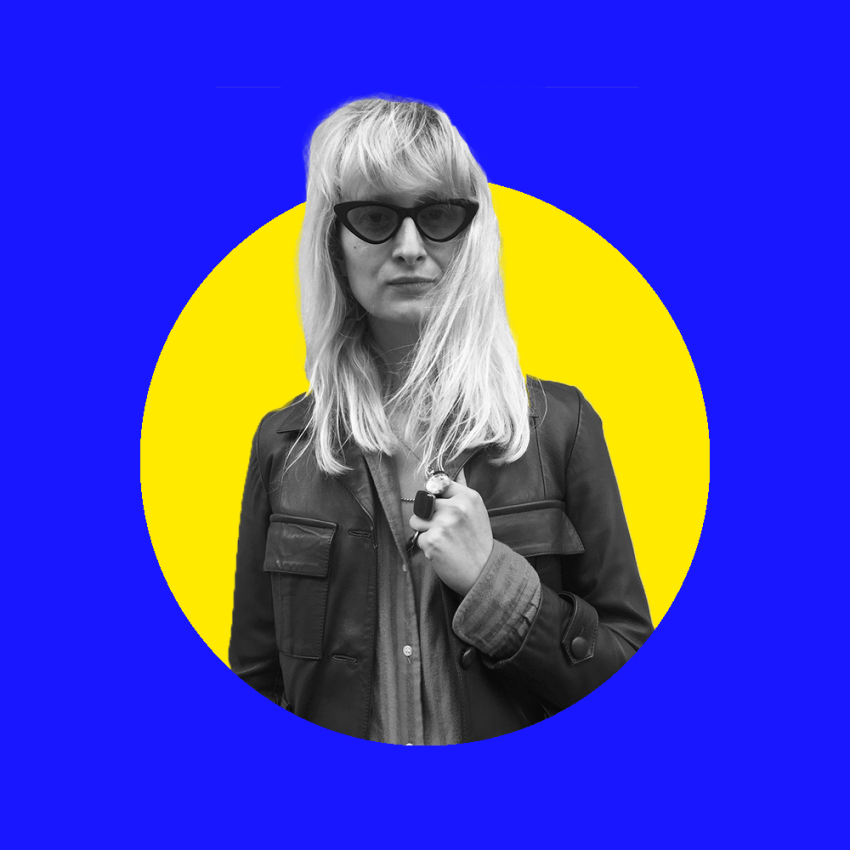 Editor-in-Chief of Abstract Stylist, having a particular interest in sustainable fashion agenda and fashion as a form of art. Compiling a quirky @bourgeoishomeless style diary, mostly in black & white. 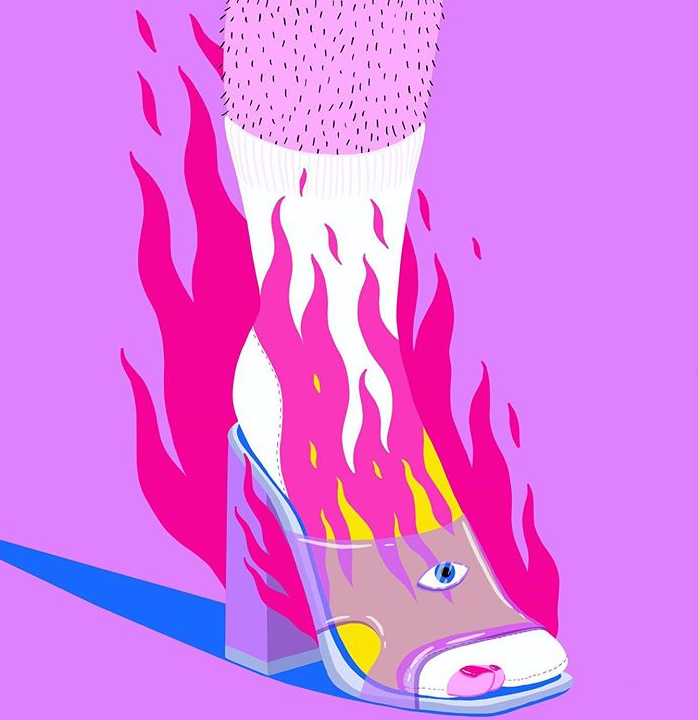 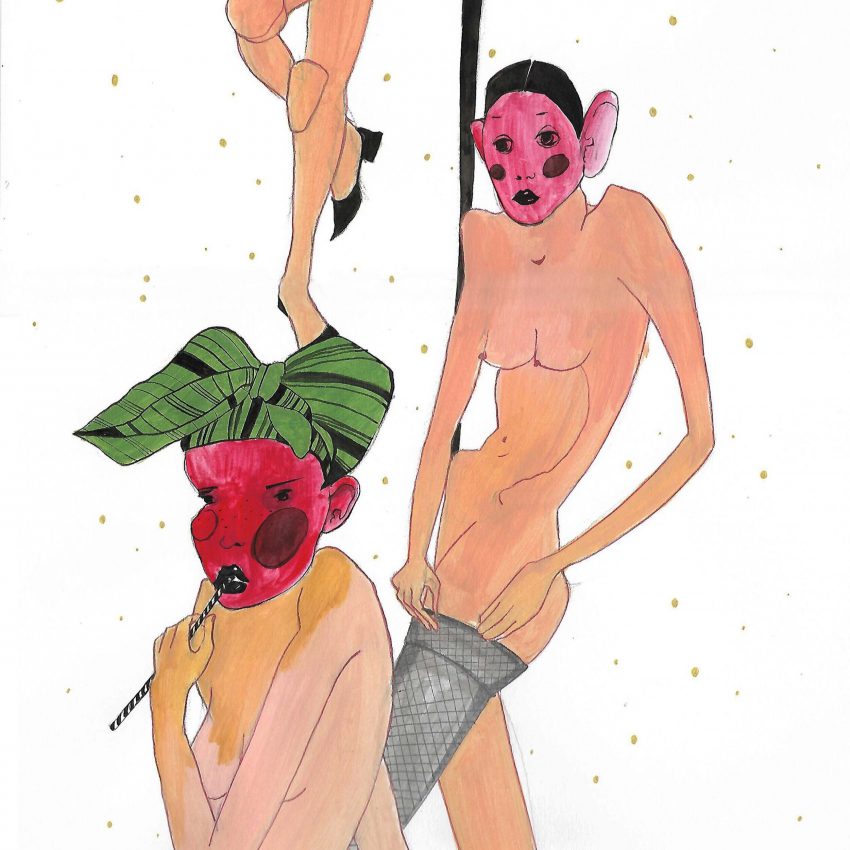 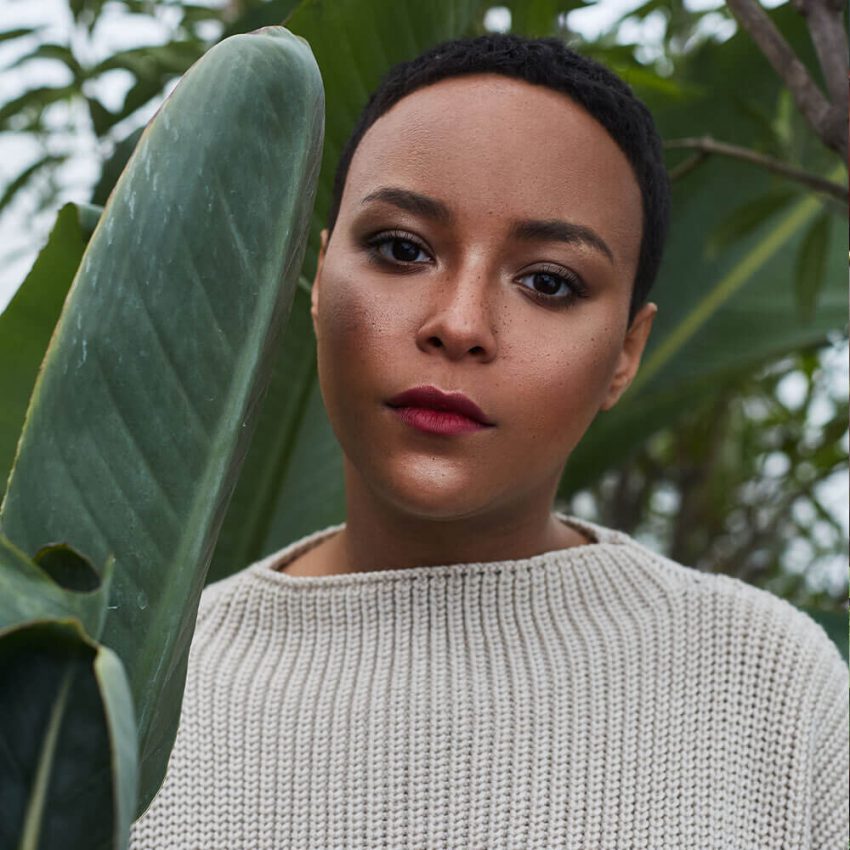 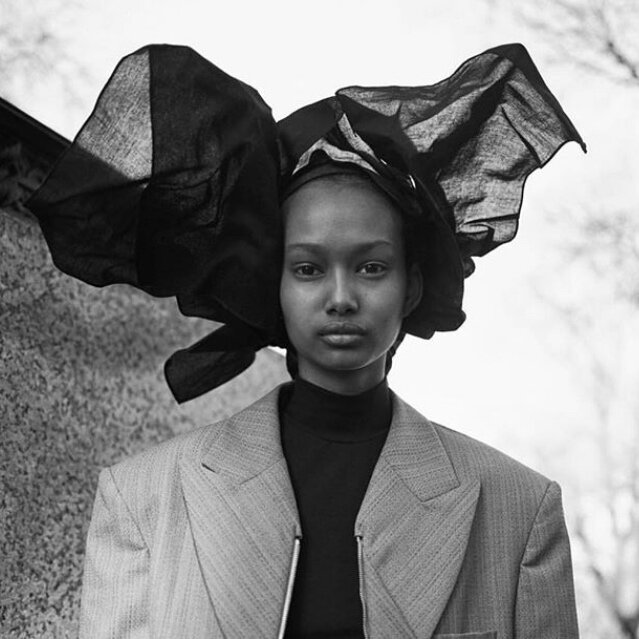